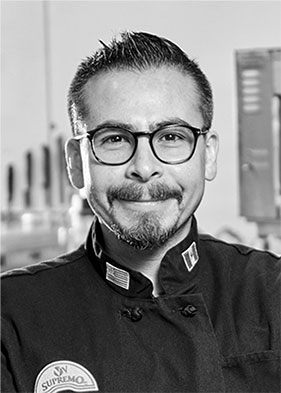 Mario Gerardo Cota is the Executive Chef at V&V Supremo Foods, Inc. He lives in the Pilsen Neighborhood of Chicago with his family, where V&V Supremo is headquartered. While obtaining a BA in Biological Science and working in the field of dentistry with the intention of pursuing a career in the medical field, Mario’s travels sparked his first interest in food. This new-found curiosity inspired Mario to attend culinary school and participate in an internship in Sorrento, Italy.

After completing his culinary training, Mario started a restaurant venture in the Mexican enclave of Pilsen. Within a year, he acquired full ownership and established relations with Mexican agencies, such as ProMexico, which enabled him to become fully immersed in regional Mexican cuisine. For five years, he continued to hone his skills with a hands-on approach, and oversaw every aspect of the business. Unfortunately, in the summer of 2012 the restaurant suffered severely from an electrical fire and Mario decided to pursue other endeavors. Soon after he became a chef instructor at Common Threads, a national non-profit organization whose focus is to promote diversity and healthy eating through cooking and nutrition programs in low-income urban communities.

On April, 2015 Mario began working for V&V Supremo, a 50-year old family owned manufacturer of authentic Mexican cheeses. He oversees the executive kitchen at V&V Supremo, where he and his team focus on latest trend recipe development, highlighting the attributes and versatility across not just Mexican cuisine, but global cuisine as well.

In addition, Chef Mario provides on-going training both internally and externally on the full V&V Supremo product line. He is actively involved in presenting to customers and helping with menu ideation and conducts food demonstrations at key food shows around the country.

This Apple Quesadilla with Caramel recipe is super

Coleslaw is one of the most popular side dishes at

Today is National Cheesecake Day, and there's no b